A few weeks ago, I went to the Camden Aquarium.

Weekend forecasts predicted freezing rain for most of the day, but we lucked out with weather in the 40s. I forgot what it was like not to be cold. Turns out it’s awesome.

What’s nice about the aquarium is that they have their own parking lot right across the street. You have to pay $10 which seems like a lot, but it’s a short distance to the ticket area and is not located on a busy street.

Normal admission costs about $28 a person. For an additional $3, you can see the 3D show, which plays every half an hour. Once we paid, we were ready to see some fish and the famous hippos.

A few things you should be prepared for:

The children. For a weekend, the aquarium was not as packed as it has been. There were definitely kids running around, but the crying and running into people was kept to a minimum. During busy seasons, however, parents are outnumbered. You start to understand why they still make those backpack-leash combos that parents hold onto.

The crowds in general. I’m not a big fan of crowds, so I would rather go when the place is dead. You can see the fish without being disturbed and without waiting. Certain exhibits tend to draw a lot of people, so you may have to wait awhile to get a glimpse. If you want that perfect Snapchat photo, you have to be patient. #childinmyway

Take your time. It’s easy to rush through the four zones in an hour. The aquarium has plenty of places to sit down and observe that are conveniently located to major exhibits. They also have fun facts about the fish that are worth reading.

This is probably my favorite area of the aquarium.

The hippos! Watching them swim around is mesmerizing. Even though they weigh over a ton, swimming looked effortless. The one on the left liked to hop, while the other swam in circles. 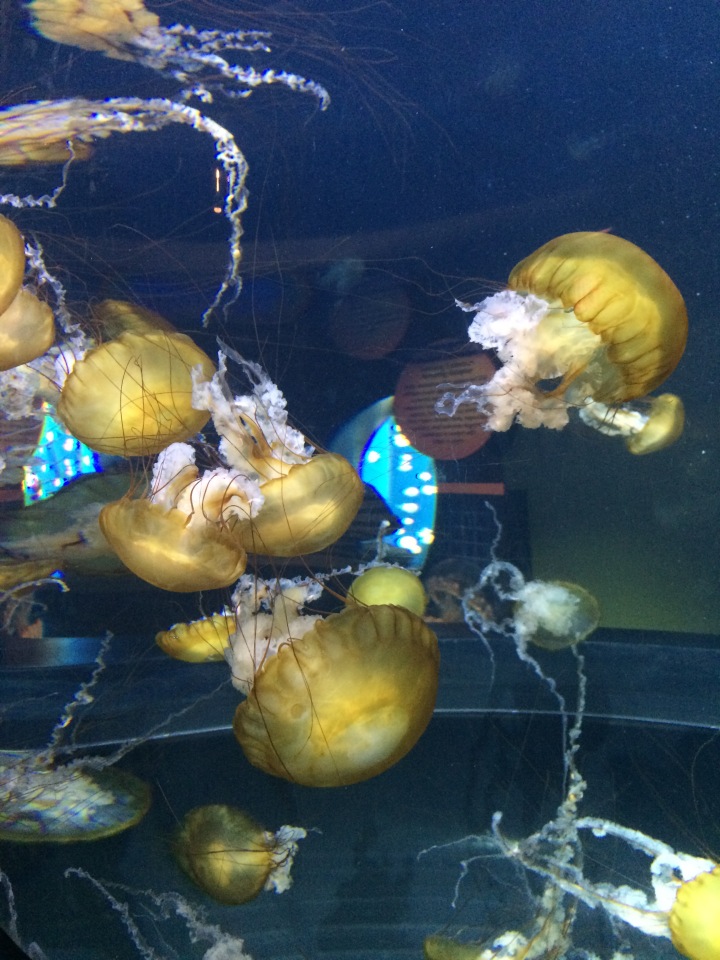 Did you know that jellyfish don’t have a heart or a brain? Crazy!

I’m blaming this child for when I get hearing aids at 80.

There was a another child who had absolutely no idea where his dad went. You know where he was? Right behind him. This is why we can’t have nice things.

Aside from the hippos, a great reason to visit is the shark tunnel. It’s kind of like swimming with sharks, but you aren’t trapped in a steel cage of death and the sharks aren’t gigantic. Instead, they swim unknowingly around the glass tunnel, allowing for some great photo opportunities.

At this point, I saw a dad carrying his baby like Allen from The Hangover. Totally hands free. He even took some selfies of the two of them. It was both hilarious and impressive.

This view of the tank is set up like a movie theater with stadium seating. It’s a great spot to watch the sharks and fish swim around. You can even catch a glimpse of the large sea turtles.

After leaving Zone A, it was time to see the 3D show. As an adult (sort of), I think the film was ok. For $3 extra, I think it was an interesting experience. There are some “surprises” here and there, but all in all it was alright.

There are also albino lobsters and lobsters with split coloring.I had never seen or heard of a blue lobster before. The blue coloring is caused by a genetic mutation and is incredibly rare. If you come across one, make sure you don’t cook it. #money

After a few hours, we were ready to leave and start eating all of the food. With dinner plans later that night, I opted for mozzarella sticks but realized afterward that it was a terrible idea. Mexican food followed and I was exhausted.

The great thing about going to the aquarium is that they are open all-year round. Each time I go, I find/ learn something new. If you have a few hours to kill, I would definitely recommend paying them a visit.

Simplicity in food and travel